Edu-Cater, is a group of educators who are striving to create 'healthy learning environments'. They design interventions for facilitators who implement them in their respective learning environments. Each module/intervention typically spans 1-2 weeks. While their work encompasses many spaces, The Edu-Cater team strongly believes in the power of books and reading, which prompted them to start a project called Treasure Trove.

“We work in a school called Sathya Sai school which is in semi-urban environment in North Chennai. Our target group is Class 5 children. Though this school does not have a proper library, there is tremendous support from their end to inculcate the habit of reading.”  shared Sriram Sampath, one of the founding members of Edu-Cater.

Siram outlined what the team does via this intervention: 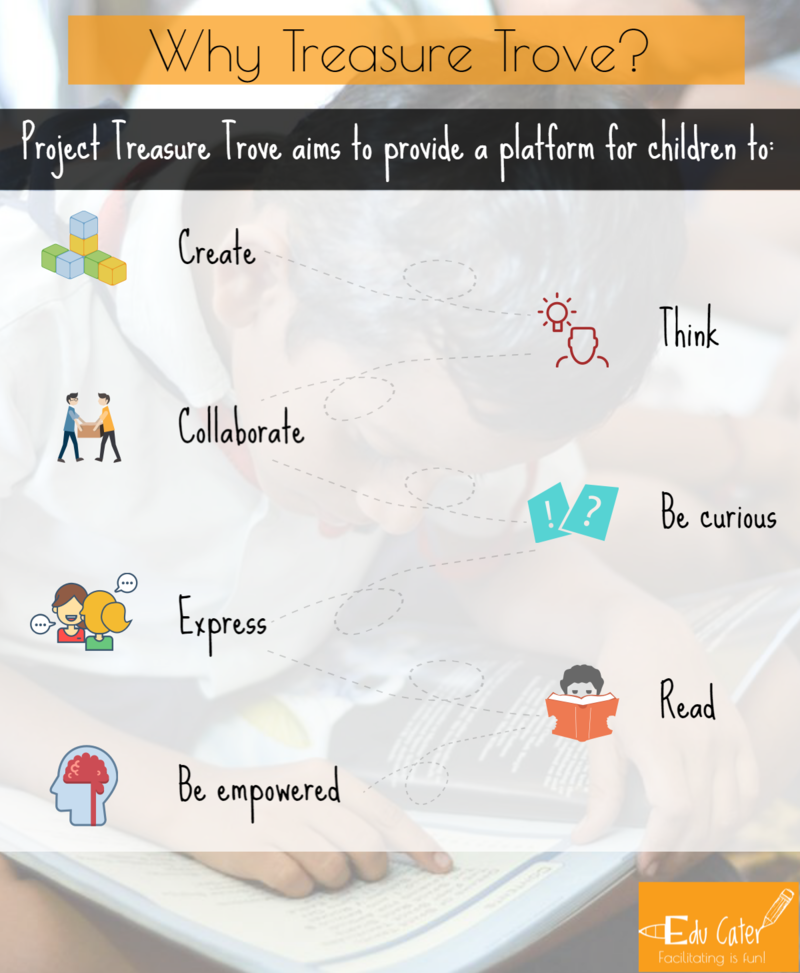 For both these interventions, Team Edu-Cater is using Pratham Books and StoryWeaver.

Introducing new words and books Treasure Trove shared the story  'The day the vegetables came to school' with children and using the story to introduce them to the words 'Author', 'Illustrator'  and 'Translator'.

“We gave all the children a small spiral notepad and encouraged them to maintain their own dictionary in it.” recounts Sriram. “The students carried  it with them everywhere to record new words that they come across and their meaning. During the course of sharing this story, students noted down many words that were new to them and asked us for the meanings.”

The team noted how children were excited to note down new words and curious about their meanings. “One of the boys had noted down a few words in his dictionary and had managed to locate the meanings of all the words except one during the course of the week.” remembers Sriram “The moment we entered the class at the next session, he headed straight to us and asked us for the meaning of the word!”

Children found many ways to use the notebook, with one doubling it up as a reference book. “He had drawn the parts of the brain in it.  When we asked him why he did this, he told us that he wanted to  use the book as a quick reference for tough content!”

Create your own story “We divided the children into teams and showed them the wordless version of 'The Birthday Party'. We then asked each team to come up with their own stories based on the original. It was delightful to see them express their ideas, which was the primary objective of the exercise. But what moved us was when they referred to their dictionary and introduced the new words they had learnt in the stories they weaved. It was amazing!” recounts Sriram “One group of girls was determined to use the new words that they had learnt the previous week. They created their story and were identifying spots where they could insert these new words. This sort of student ownership and little moments are what we call impact.”

When Edu-Cater asked one representative from each team to come forward and share their team’s story, more than one person came forward from each group to read out their stories.

“Many teams had more than one member reading out the stories as a result, and they took turns to do this. It really is a sign of their enthusiasm and confidence, to read!” feels Sriram.

The Treasure Trove project caters to around 85 children currently and there are plans to re-engage with last year's batch, making the total number of children impacted 170.

You can see more images from Edu-Cater sessions here: https://www.facebook.com/facilitatingisfun/photos/?tab=album&album_id=1489288461383170

The team’s future plans for class 6 include the purchase of a Library In A Classroom. “With this in the repository, we are confident that we can get the class 6 kids to pick up books of their choice and start reading!”

Good Luck to Sriram and his team! We look forward to reading more about them and their work!