We are celebrating International Translation Day, and we are grateful for the support of our wonderful translation partners who help us reach more children, protect linguistic heritage, and build a culture of reading. Here is a post by Archana Nambiar, Research Consultant at Pratham Books. She writes about the work done for the indigenous language, Kora, by Shanto and our friends at Suchana, in West Bengal, India.

Shanto Kora is among the first from his village to have attended college and the first person to have completed a masters education in Bengali. He does not recollect reading any literature in his mother tongue Kora while growing up, let alone children’s books. In 2007 he joined Suchana, a community group working on improving the quality of education to Adivasi children in Birbhum district of West Bengal. Today he is the Secretary of the organization, and works as a translator and development officer for the Kora language.

Suchana’s focus has been on promoting learning through the mother tongue in the early years. The indigenous languages Santali and Kora have a rich oral tradition but no children’s literature. Teachers who teach Santali and Kora children are usually completely bereft of resources for early literacy development. There are very few qualified teachers from these communities who can use their mother tongues in the teaching-learning process. Since 2009, the Suchana team has been developing a series of books in Kora and Santali using the Bengali script that support the multilingual approach to education. By 2014, they had developed 15 books in Kora and Santali that included alphabet primers, number charts, flash cards and storybooks. Shanto was instrumental in developing the first ever primer in Kora language called Allo Pora and a word book.

The collaboration with StoryWeaver changed the way in which Suchana viewed content creation. The StoryWeaver platform allowed them to translate 105 books in Santali and a hundred in Kora within a short span of two years. All these stories are published on StoryWeaver. Suchana has printed 10,000 copies of 20 titles and distributed these books to government schools, pre-schools and other organizations in the region. Both the print and digital stories are incorporated into their mobile library programme which reaches around 3000 children in 25 villages. Librarians from Suchana show the digital stories on laptops to children and conduct read-aloud sessions and related activities. Children are allowed to take the books home to read with their families.

Suchana also works with government schools on using mother tongue based approaches in early years. Santali and Kora books have been shared with teachers from these schools. The books, particularly the bilingual ones, have proven to be great resources for the teachers who are mostly from non-tribal backgrounds, for teaching tribal children. Suchana has recently trained anganwadi workers from 49 anganwadis on using these books and is hoping that these will be adopted for early childhood education.

There is empirical evidence to suggest that learning to read in one’s mother tongue in the early years makes learning more engaging, relevant and enjoyable for children. Children who benefit from mother tongue instruction also learn a second language faster and better. Having access to a variety of books in these languages can help children transition from their mother tongues into Bengali, the state language.

Shanto feels that the storybooks have given certain legitimacy to his language. Until recently, Kora has been outside the realm of literature. He prides himself on his contribution towards preserving a language which might have been on the brink of disappearance. The translation process gave him an opportunity to revive some of the lost words in Kora. People from the Kora community were using several Bengali words instead of the original Kora vocabulary. Together with fellow translators, he re-learnt some of these disappearing Kora words from community elders and included them in the storybooks, wherever possible. Examples of such replaced Kora words are chahalam (tail), jhanahjaha / rik (do things), tayen (alligator), arshi (mirror), taruh (tiger), teyang (brother-in-law), hili (sister-in-law). 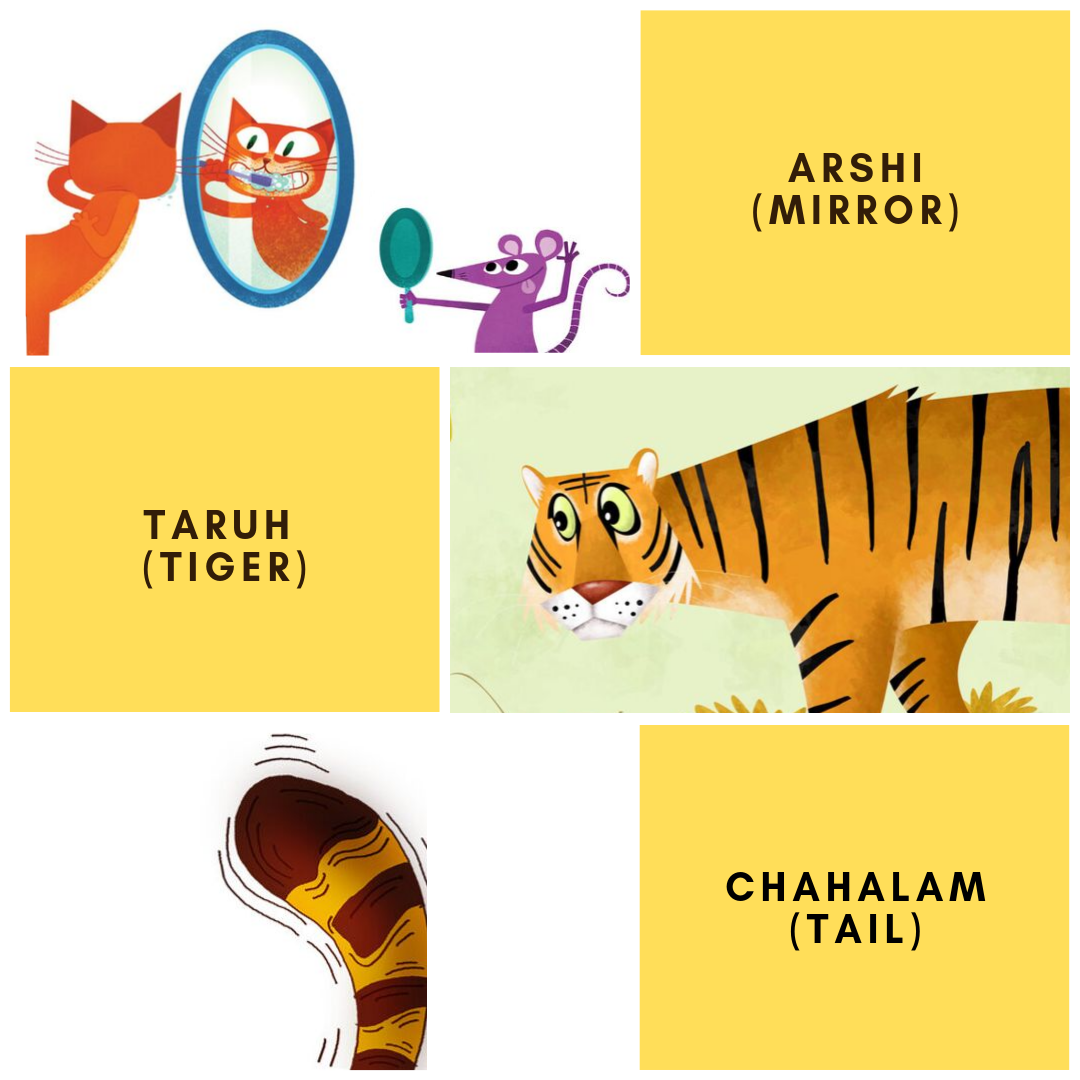 ‘Cat brushing her teeth and a rat looking in the mirror’ by Rajiv Eipe, ‘Tiger looking at hare’ by Rohan Chakravarty, ‘Tail of a tiger’ by Nirzara Verulkar

Shanto is happy that children from his community can now read in their mother tongue and tell their own stories. He attests to the fact that the storybooks have given children a sense of identity. These books have ensured that Adivasi children can discover the joy of reading. Knowledge of one’s mother tongue is critical to connecting to one’s roots and keeping the cultural heritage alive. StoryWeaver has empowered indigenous writers and creators to create engaging children’s books in their own languages. Shanto is hopeful that he will continue to create more stories for children and is excited about developing his first original story on StoryWeaver.

Watch our interview with Shanto here.

You can read the storybooks translated by Shanto and access StoryWeaver’s Kora library here.