Azad India Foundation (AIF) was founded by Yuman Hussain in 1998 to seed initiatives in education & primary health care. The organisaton's activities reach out to marginalised women, adolescents and underserved children from rural and urban areas of Kishanganj district in Bihar. AIF has learning centres at 73 villages in three blocks of Pothia, Kishanganj and Thakurganj in Kishanganj, impacting 3,500 + children directly in the area. The children in AIF's centres are aged between 6-9 yeas and are either school dropouts or attending Madrassas. The centre's syllabus includes Hindi, English, Science and Maths. The main aim of the initiative is to ensure that children are ready to merge with mainstream education in state-run schools by grade 4.

AIF is also our first partner translator to have completed its goal of translating 100 StoryWeaver books into Surjapuri. Surjapuri is spoken in pockets of Bihar, West Bengal, Assam and Bangladesh by 1.2 million people. In Bihar, the language is spoken in Koshanganj, Katihar, Purnia and Araria districts. In an email interview Yuman Hussain tells us why creating a hyperlocal library in Surjapuri is important and how AIF managed to reach its goal of 100 books in collaboration with its project and cluster coordinators.

Azad India Foundation (AIF) has been working in Kishanganj district of Bihar from 2001. It started its activities with a non-formal education and vocational training centre for women. Over the years, AIF’s focus has been on the development of poor and marginalized children, adolescents and women. Our activities are in the fields of women’s literacy, formal school education, non-formal education, rural employment, income generating skills, SHG formation, and community health programmes. Currently, we are directly working with 3,500 children in the primary classes through learning centres in 73 villages of four blocks — Kochadaman, Pothia, Kishanganj and Thakurganj.

What are the long-term effects of a lack of easy access to resources in mother tongue languages for the communities that you work with?

Surjapuri is local language spoken among a large section of people in the Seemanchal area (Kishanganj, Araria, Purea and Katihar) of Bihar. Unfortunately, we have not seen any books or resources available in the local language for the children. There is a possibility that these languages will be lost over a period of time as more and more people now speak Hindi. In fact, when we started translating books in Surjapuri and shared them with the children and community members they were unable to recognize their own written language.

What are the benefits of creating a local digital library of joyful storybooks in Surjapuri?

Creating a hyperlocal library at StoryWeaver will help our children have access to and preserve Surjapuri as their language. It would also enable them develop their reading skills and enjoy stories from all over the world in their own dialect. The digital library is free besides being easily accessible to every one. The mobile friendly feature has made it possible for the books to reach even remote corners of the country. 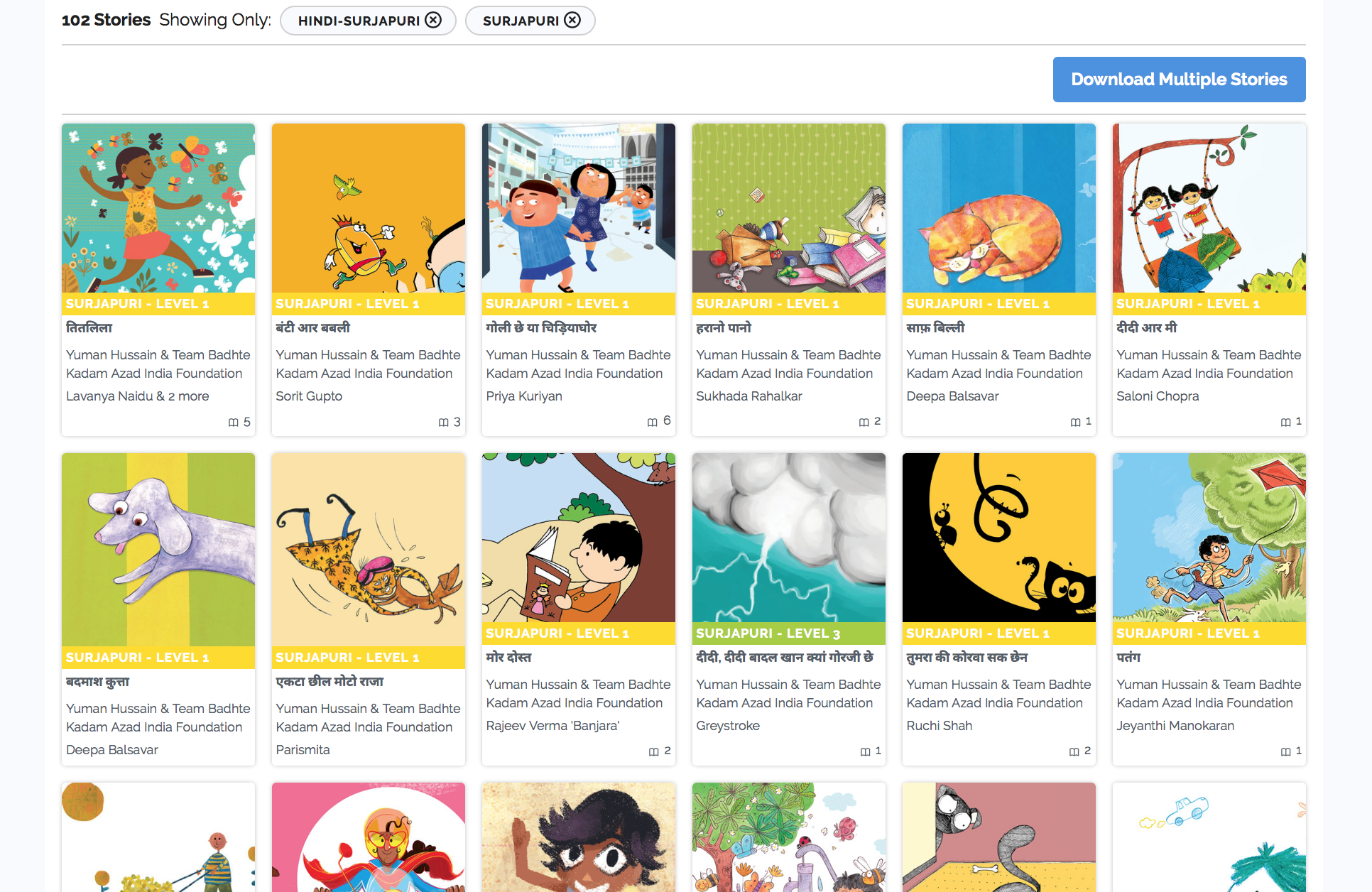 Tell us more about your team of conributors and how you managed to translate and publish the 100 Surjapuri stories?

The stories were translated by the team of project Badhte Kadam comprising cluster coordinators Aslam, Chand, Juhi and teachers. They were really excited about creating Surjapuri stories as it gave them an opportunity to contribute to the preservation of their own language. Muzzamil, who is the project head, reviewed the stories. The stories were chosen according to the themes and levels of the children accessing them. The toughest part was the typing and uploading of the stories that was done diligently by Saqlain, our computer operator. AIF is really proud and thankful to its team members for completing this programme within the stipulated time period with sincerity and enthusiasm. We will continue adding more stories and hope to bring the joy of reading to all children. 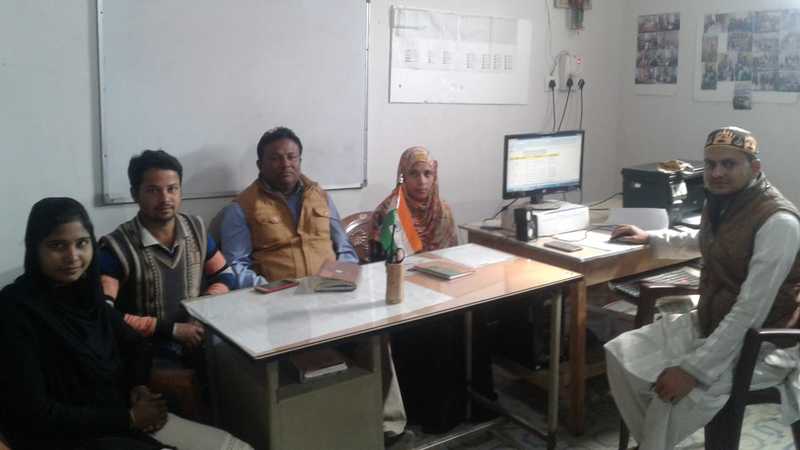 How does Azad India Foundation plan to use this digital library of a 100 books?

AIF plans to introduce these stories among the children at our learning centres. We are also spreading the message through social media about the StoryWeaver platform so that the community can access, use these stories and help in building this digital library further with many more books. This is a small step towards the preservation of local languages for which we are grateful to the StoryWeaver platform.

You can read the Surjapuri stories translated by  Azad India Foundation here.

For the last 13 years, Pratham Books has published 300 titles in 18 languages and helped put them in the hands of 3 million children. But in a linguistically diverse country like India with 122 major languages and 1599 ‘other’ languages, achieving the mission of ‘a book in every child’s hand’ becomes a challenge.

StoryWeaver was envisioned as a means through which we could significantly scale the creation of joyful reading material for children in a language they’re fluent in, whether it’s a mainstream, minority, tribal or endangered language. These are languages that are traditionally overlooked by mainstream publishing. Since its launch, StoryWeaver has played a small but key role in the preservation of these languages, by providing language champions, teachers and authors a platform on which they can translate, create, download, print and share stories with ease and for free.

Surjapuri is a lesser known Bengali dialect is spoken in pockets of Bihar, West Bengal, Assam and Bangladesh by 1.2 million people. In Bihar, the language is spoken in Kishanganj, Katihar, Purnia and Araria districts.

As many of the villages in the Kishanganj  district are located in the interior realms of the district, they have little by way of basic infrastructure and primary health care. The literacy rate is low and primary schools often lack even the most basic facilities. As most of the high schools are located in Kishanganj and Thakurganj towns which are far from the villages, girls tend to discontinue their education leading to a high drop-out rate.

The Azad India Foundation (AIF) was founded by Yuman Hussain in 1998 to seed initiatives in education and primary health care. The activities reach out to marginalized women, adolescents and underserved children from rural and urban areas of Kishanganj district. AIF has 73 learning centres impacting 3500 children directly in the area. StoryWeaver is periodically used in these centres.The children in AIF’s centres are aged between 6 - 9 years and are either school dropouts or children attending Madrassas. The centre’s syllabus includes Hindi, English, Science and Maths.

Yuman Hussain shared “The main aim of the initiative is to ensure that children are ready to merge with mainstream education in state-run schools by grade 4. Literacy initiatives play a big role in ensuring this. The children that I engage with at the learning centres have never seen a story book in their mother tongue. Even my teachers haven’t read books in Surjapuri.”

Previously, AIF used printed storybooks in the centres and were limited by the number of books they could source. Plus, these books were not in Surjapuri.Through StoryWeaver AIF has access to thousands of stories free of cost.

“The reading culture among children is diminishing.” says Yuman. “I can put together a sizeable bank of stories from StoryWeaver as they are freely available and nudge the children towards reading. Before I came across StoryWeaver, I hadn’t thought of translating stories for the children. When I realised that it was so easy on the platform, I decided to give it a shot. The level 1 and 2 books were really fun and straightforward and I felt perfect for the children we worked with. Translating on StoryWeaver for children has made me realise the importance of picking the ‘right’ words in line with the reading level and the essence of the story. Also, Surjapuri has minor variations across villages, so choosing a word that would be understood across speakers was also an enjoyable challenge for me.”

The AIF Centres are not tech equipped as there are electricity issues in the villages. So Yuman picks stories to read to children or for translation at the AIF office in Kishanganj where there is better connectivity. She uses Google Input Tools for translations and then, pastes the text in the StoryWeaver editor. After translating the stories, they are downloaded, printed and distributed to teachers who then carry the stories to the learning centres to read to children.

Yuman strongly believes that reading books in Hindi and English will improve the children’s language skills. “Plus, if educational concepts are taught through stories in their mother tongue and if we engage children in activity based learning, they are more eager to learn and will grasp the concepts better.”

Yuman was motivated by reading how other educators were using StoryWeaver in their classrooms.

“The stories were received very positively by the children. The stories in Surjapuri, the mother tongue of the children, left them amazed. I plan to keep exposing the children to more and more stories with the hope that they will then start to read voluntarily over the course of time.”

Watch this short video about AIF.