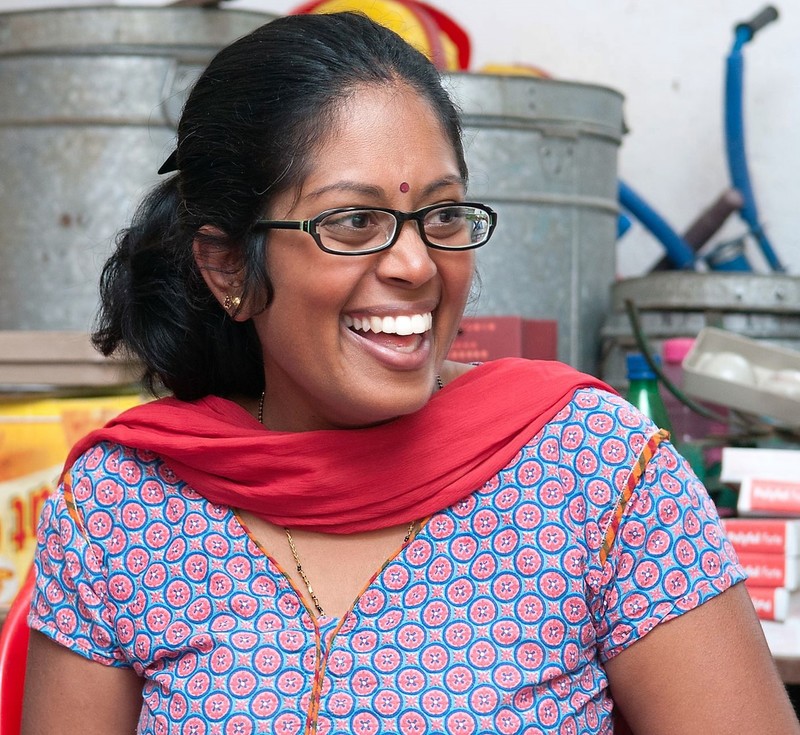 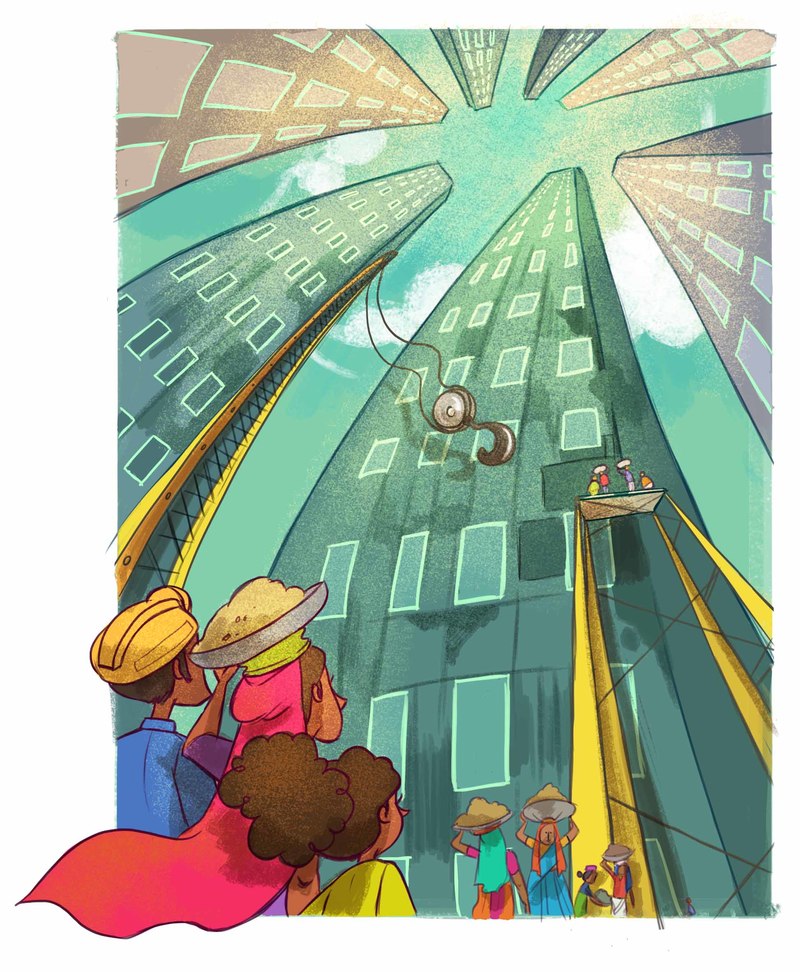 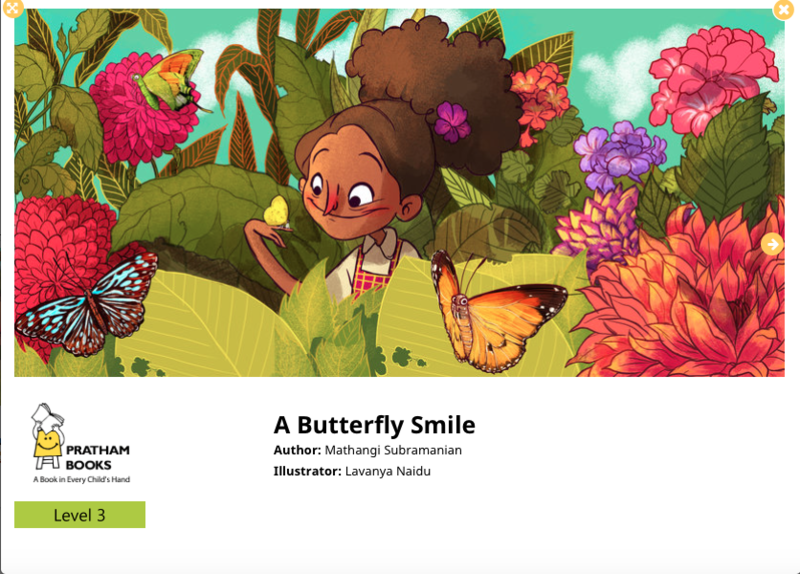 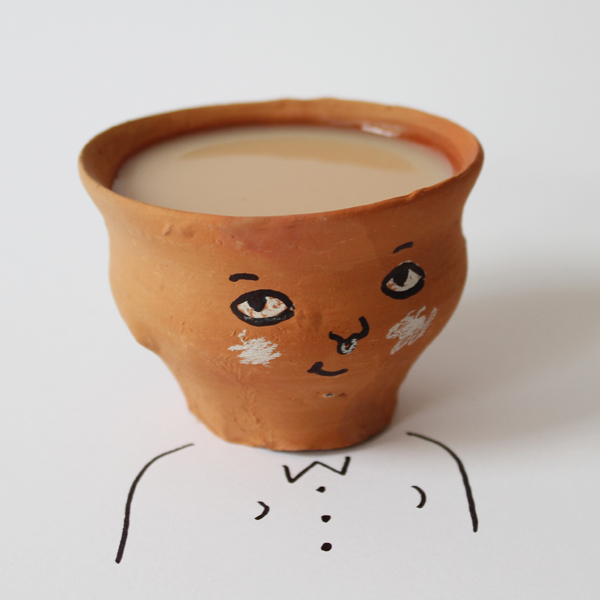 Aindri Chakraborty is a communications designer specializing in narrative illustration and animation. She is one of the members of The Kadak Collective.

Apu’s Giant Earthquake is not only about why and how earthquakes happen, it is also a story inside a story. It is a story of the off-tune Bey-asura who likes to sing. It is also about Apu and his sister Pia, their grandmother and pet dog who are in the middle of both Bey-sura’s song and an earthquake.

I wanted to start with the characters. They were based on Sudeshna Shome Ghosh's picture below. 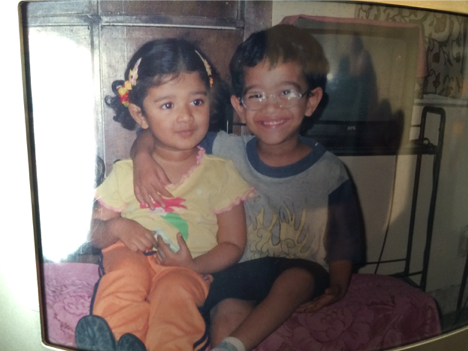 This is how the character Pia evolved. 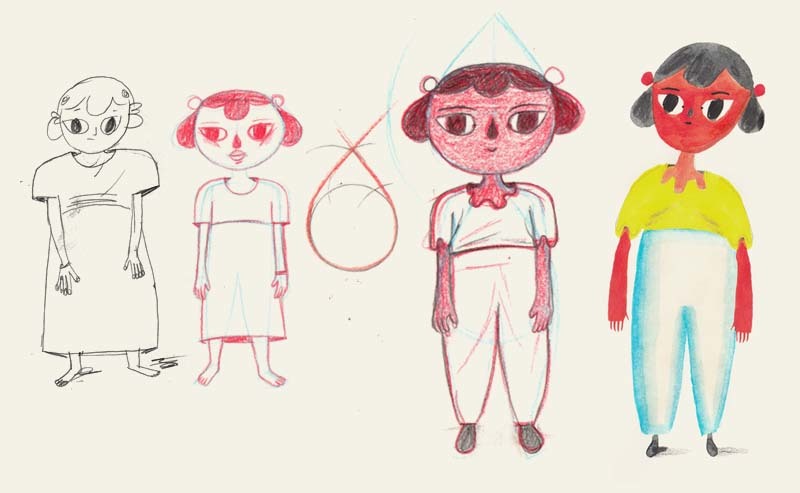 Bey-asura is an Asura who causes a lot of destruction when he sings! I felt pity on Bey-asura in the story because I like to sing but I am not a very good singer! I had to find a way to justify why Bey-asura was a bad singer. I shaped his head like a string instrument and then realised, maybe he is a bad singer because he hasn’t been tuned yet. So there is a broken string which I designed as his hair. 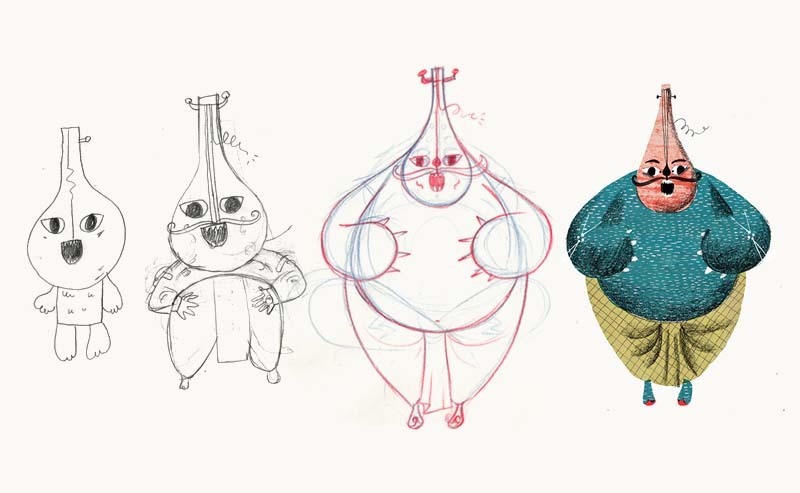 I made lots of textures of the earth. This is based on geology diagrams. 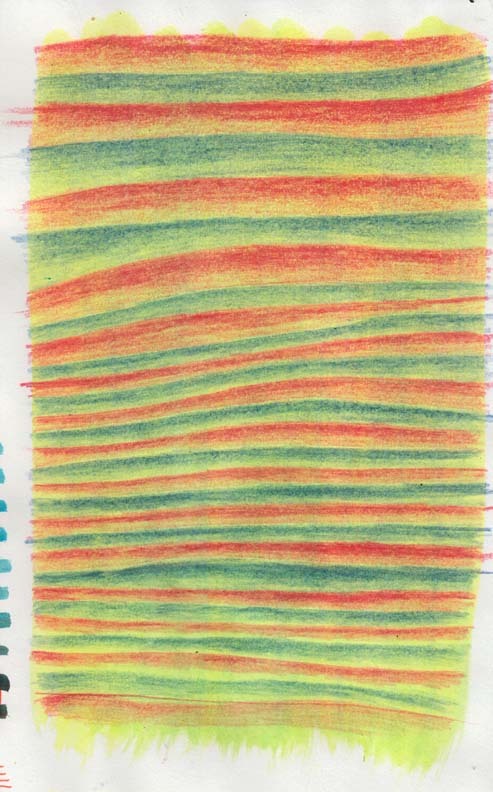 I tried this one using salt while the ink was drying, so it created a nice rocky texture. 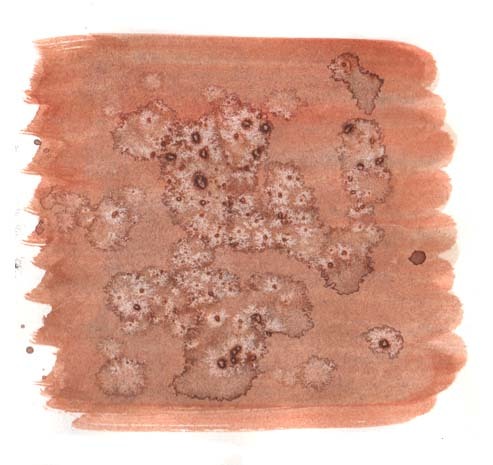 I then collaged the textures to create landscapes for the story. 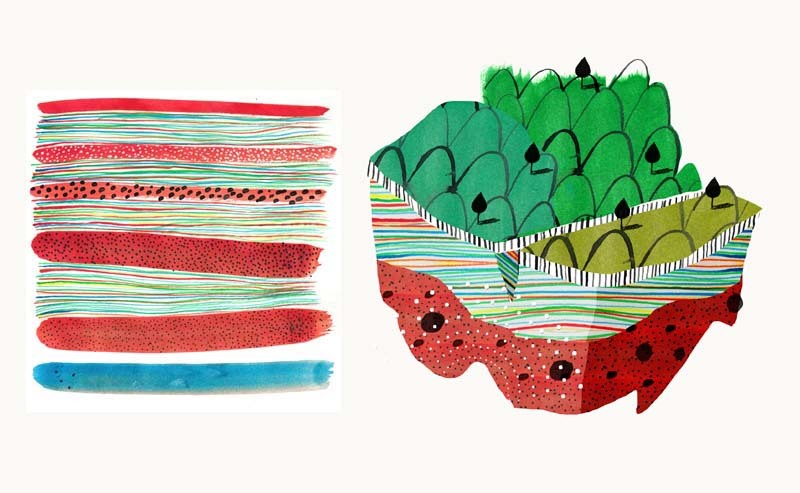 'Apu’s Giant Earthquake' is both informative and imaginative so I tried to keep it sciency but also whimsical. It was exciting to work on StoryWeaver's digital-first children's story which will be available to everyone as it's openly-licensed.

'Apu's Giant Earthquake' will be available to read in 5 languages on StoryWeaver. If you can't find the story in a language you're fluent in, feel free to translate the story on www.storyweaver.org.in and share it with us! 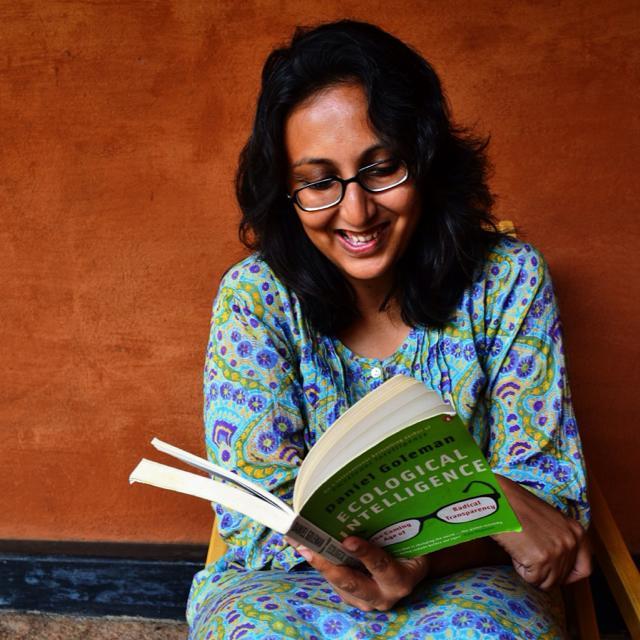 When Bijal Vachharajani is not reading Harry Potter, she can be found looking for tigers in the jungles of India. In her spare time, she works to fund the trips and books. She did this by working as the Editor at Time Out Bengaluru. After having studied climate change at the University for Peace, she now writes about education and sustainable development and is a consultant with Fairtrade Asia Pacific. She is also one half of BAM! Books, an Instagram-led project which talks about children's and Young Adult books. She tweets at @bijal_v.

My mother’s kitchen operates on a seasonal calendar, something I took for granted for a long time. As winter would approach, wondrous smells of ghee, whole wheat flour and jaggery simmering in a kadhai would tell us that godpapdi was being prepared that day. When rain would slow down our work schedule, spinach would no longer be cooked in the house, because mum believed that insects nestled in the palak leaves during the monsoon season. Summer would herald the impatient wait for our regular mango seller, until finally bowls of aam ras, chilled to golden goodness, arrived on the lunch table.

There’s an anticipation to eating seasonally – nothing beats drizzling notun gur over your creamy white dahi in winter, nibbling on slices of raw mango slathered with salt and red chilli powder at the beginning of summer, and wrestling with masala bhutta cobs in one hand and umbrellas in the other during the monsoon season. Which is pretty much what Neema, the protagonist of the picture book "What’s Neema Eating Today?" does – eat with relish but seasonally. And Priya Kuriyan has created the perfect Neema – a child who eats with abandon, enjoys her food, while revelling in nature’s bounty. Really, this picture book is all down to the extremely talented Priya!

Today with technology, our food’s taken on a homogenous quality which while convenient, is almost boring. Watermelons are available through the year, never mind that they taste bland most months. Strawberries taste like little cardboard pieces, while the mysteriously-available-in-March-mangoes are best left on trees to ripen naturally. I stopped eating bananas for a while when I read this story about how to keep up with our insatiable demand, farmers were being forced to ripen the fruits with the help of harmful chemicals. And I suspect Neema would definitely turn up her nose at it as well.

Which is why I was excited to do a book on eating as per the season, when Yamini Vijayan of Pratham Books StoryWeaver asked me to write one (I commission and edit a set of STEM picture books on environment for them). Of course, one of the challenges was leaving out autumn and spring. In school, we learn about the five types of seasons – spring, summer, monsoon, autumn, and winter. But most parts of India experience summer, monsoon, and winter, and which is why we decided to concentrate on those seasons. And Priya has captured the seasons beautifully – from the glowering clouds that roll up during the monsoon to that gorgeous feeling of being outdoors on a crisp, winter day. It’s all in there.

Neema is inspired from some of the work I have done with Fairtrade over the last couple of years – I have had the privilege to meet farmers and I am always gobsmacked at the kind of seasonal and local variety you find in our country. At the Fair Trade Alliance Kerala seed fest, a farmer from the Mananthavady taluk in the Wayanad district of Kerala had put up a dazzling display of 26 kinds of chillies. Another farmer who is part of Chetna Organic in Telangana is saving a local variety of red gram seed and growing it for her family. In Odisha, I sampled kala jira rice, which when cooked is so fragrant, that you will forget basmati in a trice. 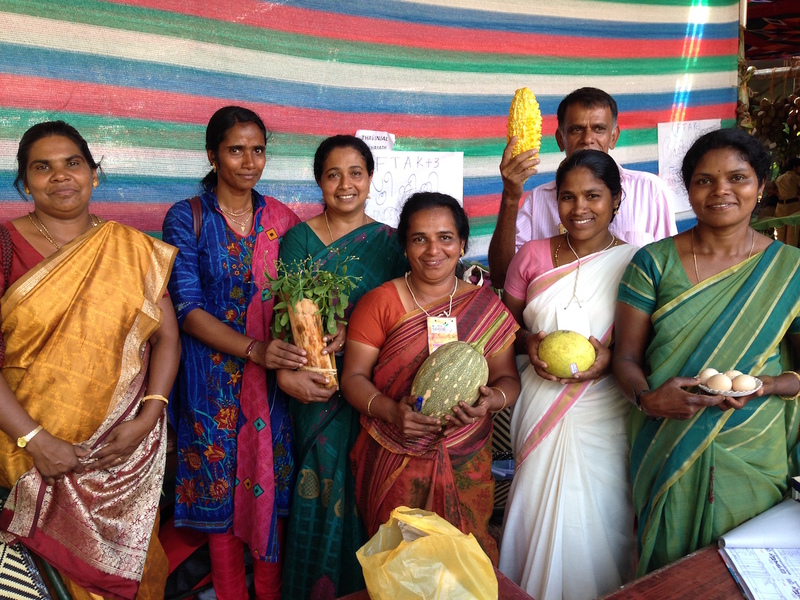 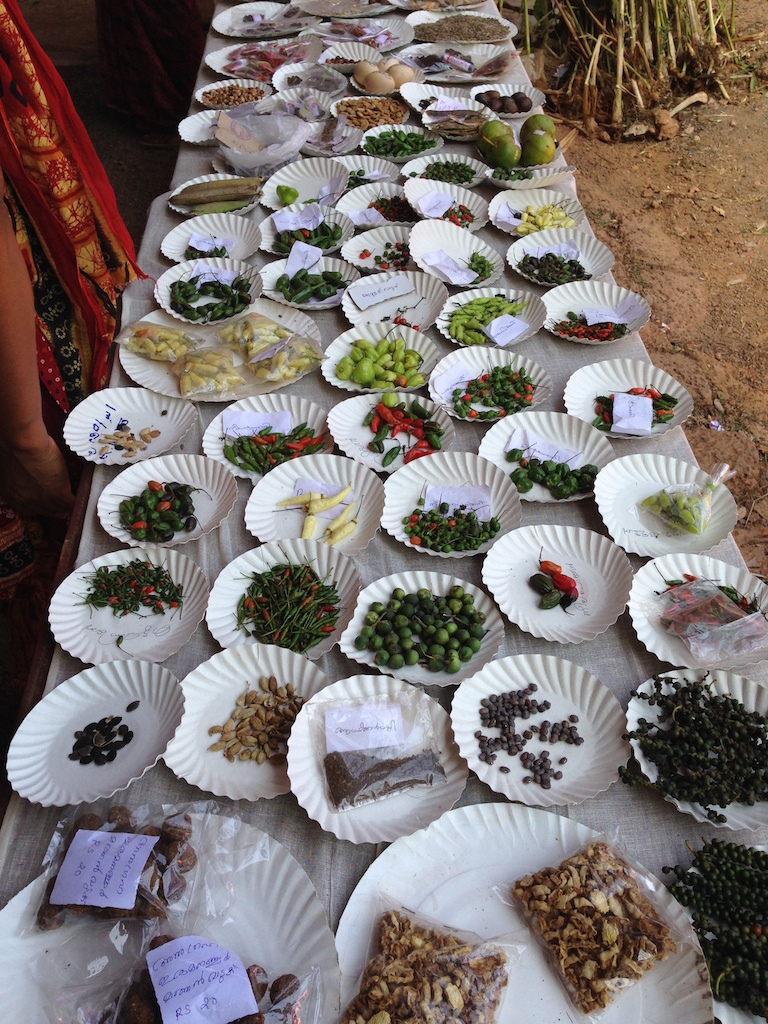 However, not all’s well in the world of food diversity. The Food and Agriculture Organization of the United Nations estimates that since the “beginning of this century, about 75 per cent of the genetic diversity of agricultural crops has been lost.” And climate change is impacting agriculture at an unprecedented pace – the FAO says that the “change in seasonality attributed to climate change can lead to certain food products becoming more scarce at certain times of year. Such seasonal variations in food supply, along with vulnerabilities to flooding and fire, can make livelihoods more vulnerable at certain times of the year. Although these impacts might appear indirect, they are important because many marginal livelihood groups are close to the poverty margin, and food is a key component of their existence.” 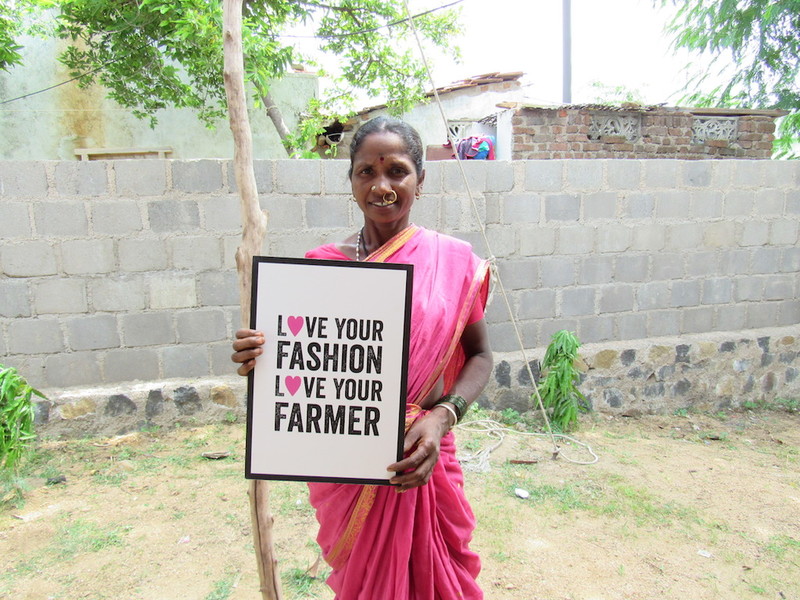 It’s not easy always to eat seasonally, when you’re shopping online or faced with a dazzling array of apples, kiwis and oranges from far-flung corners of the world. Our food system has increasingly become complex. But ask your fruit seller, keep a track of seasons, and enjoy eating them. After all, fruits and vegetables taste best when in season. Or simply like the meme goes:  Neema eats with the seasons. Neema is cool. Be like Neema.

(Psssst... we had a super fun, informative twitter chat with Bijal on January 4th. If you missed it, you can read it here on Storify!)