#FreedomtoRead 2019: Educator Ana Jovic on creating a hyperlocal Serbian library of 50 stories and living life with her family and other animals

A Serbian language teacher by profession, Ana Jovic loves to translate books. One of our language champions, Ana has played an important role in our #FreedomtoRead 2019 campaign and has just reached her goal of translating 50 stories into Serbian. In an email interview, she tells us how she hopes to build a repository of stories, by being a part of this campaign, for children from the Serbian diaspora and how much she enjoys the process of translation.

Tell us something about yourself and you connection with Serbian?

I am an English and Serbian teacher. Serbian is my native language. I studied the English language and literature, and teaching Serbian as a foreign language, so I hold two Master’s degrees. I’ve been teaching for 18 years now both online and in brick-and-mortar schools. Teaching is both my passion and profession. I love teaching and I hope to never stop doing it. I live in the countryside with one husband, two sons, four dogs and ten cats. In my free time, I enjoy a good book, a cup of black coffee, and furry company in the form of my cute cats in my lovely backyard.

What are the benefits of creating a hyperlocal library in your mother tongue?

As a Serbian teacher, I realised there are very few online books in Serbian for children. Besides, these resources don’t cater to different levels, ages or interests. Creating a hyperlocal library at Storyweaver will tremendously help children of Serbian diaspora to preserve Serbian as their heritage language. It would also help them develop their language skills and enjoy fiction in their mother tongue. This would enrich their personal experiences and allow for wider use in their heritage language schools. Such a library would also provide material for family reading time when parents and children share the language while reading and discussing stories.

You have now translated 50 stories to Serbian. How was the experience?

I loved it. I easily lose myself in translation, so the time stops for me then. I enjoyed each and every book both as a reader and translator.

Of the 50 stories that you translated, which story would be your favourite and why?

This is hard to answer. All of them are special. But if I had to choose one, let it be Counting Cats. It’s about a boy who rescues cats and brings them all home. He ends up with a bunch of cats. I can relate to this story since I’m like the boy – I have ten cats. I couldn’t resist their cuteness and helplessness so I rescued them all. Now, I have ten cats and still counting. Just like the boy from the story.

Did you face any challenges while translating a particular text and how did you overcome the same?

I have to admit that translation is an enjoyable and easy process for me. However, I find it hard to translate rhymes. You have to find rhyming words in Serbian that can keep the meaning of the original rhyme. That’s the hardest part which takes most time and energy. The way to deal with it is to think hard, play with words and try as many combinations as possible to find the one that works. However, once I find a solution that sounds good and means the same as the original, I feel immense satisfaction.

Do you plan to share the stories you have translated?

I would like to present the platform and the stories to a Serbian audience. I do hope that the stories will soon reach all children of the Serbian diaspora who would like to read but can’t get hold of books in Serbian easily. I hope that this Serbian library will become the families’ favorite resource of Serbian storybooks. 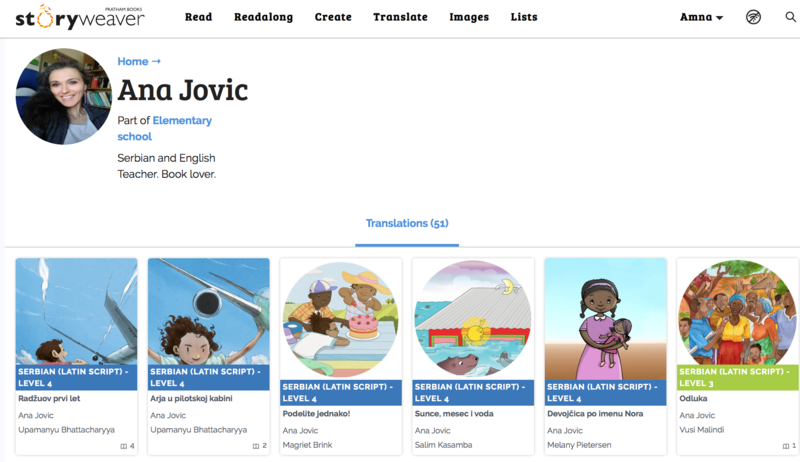 You can read the Serbian stories translated by Ana Jovic here.

Sahitya Akademi Award winner for his novel ‘Karmelin' and also, the recipient of the Vimala V. Pai Vishwa Konkani Sahitya Puraskar award for his novella 'Tsunami Simon', Damodar Mauzo is a novelist, a short story writer, a critic and a script writer.  His collection of stories ‘Teresa’s Man’ was nominated for Frank O' Connor International Award in 2015. Co-founder of Goa Art & Literature Festival and also a co-curator of the litfest, Damodar Mauzo, would perhaps, best introduce himself as an activist for Konkani. He has presided over the All India Konkani Sahitya Sammelan, a literary conference in 1985 and also, served as president of the Konkani Bhasha Mandal, Goa’s premier organisation endeavouring the promotion of language, literature and culture.

I am a bit worried over the vulnerability of my language, Konkani. Not that it is losing its vibrancy. Not because it faces any threat from globalization nor because the number of speakers is on decline. What worries me is intergenerational transmission process getting disrupted or halted.

In spite of the imposition of the Portuguese by the colonial regime by passing the Decree in 1684 to ban the use of Konkani even in speech, the language remained Lingua Franca, thanks to its speakers. Konkani has also survived the threat from the neighbouring language Marathi that had claimed it to be its dialect. The language has paid huge price for sustained existence. Today, Konkani is part of the Eighth Schedule of the Constitution and also is the Official Language of the state of Goa. With Jnanpith and Sahitya Akademi awards coming her way meritorious Konkani literature is being taken cognizance of nationally and internationally. Yet, when threat of extinction looms large on many leading languages, I do become apprehensive, not without grounds. The first scare I felt was in February 2010, when the last speaker of Bo language of Andaman islands, Boa Sr. died. Death of a language is the death of a culture. People the world over strive to safeguard their culture as their language is their identity. They have already taken a proactive stand to preserve their linguistic identity anticipating the hegemony of the English language in the wake of the Internet Era. Aware of the situation moving towards monolingual world UNESCO had started a project called Universal Networking Language (UNL), that would thwart the monopoly of one language. Vide UNL, the content in one language would be codified and then would be transferred into any desired language by decoding it. At some stage it was noticed that this project was not moving on at the behest of the perpetrators of domination of English. It was only when Japan, France and Germany raised their voice at this mischief that the project picked up momentum.

It is true that there are, the world over, around seven thousand spoken languages, over half of which are feared to die by the end of the present century. Of these about 2000 languages are seriously endangered as they have fewer than 1000 speakers. In India itself 191 languages are classified as vulnerable or endangered. 1961 Census of India recorded total number of languages as 1,652. However, 1971 Census eliminated many of them following the decision to ignore the languages with less than 10,000 speakers. Dr. Ganesh Devy of Peaple’s Linguistic Survey of India (PLSI) says, “As per the 2011 Census, there are about 122 languages spoken by more than 10,000 people. Of them 22 are the scheduled languages. Other than the 122 languages, the survey has come up with languages that are spoken by less than 10,000 people many from tribal areas, nomadic communities and from the interiors of north-eastern part of the country.” The PLSI is a rights-based movement, which sees language as crucial for the effective development of fragile communities and for stemming the erosion of India’s diverse, multilingual, and composite heritage.

For Konkani, the major jolt is the shift in the medium of instruction. People prefer to send their wards for primary education to either Marathi medium or the English. Marathi because it has been a tradition and English because it is trendy. Masses that follow the classes blindly believe that their wards will immensely benefit by this shift, not realizing that the ward will never master the OTHER language. A UNESCO report says, “In a situation where the medium of instruction in school is a language that is not spoken at home the problems of learning in an environment characterized by poverty are compounded, and the chances of drop-out increase correspondingly.” At yet another UN meet on the subject it was asserted that ‘states have an obligation to preserve and protect the child's cultural identity, as an essential element for his or her development.’ It is a proven fact that Mother tongue literacy classes improve students' writing and higher-order language skills in their first language. Research has shown that many of the skills learned in the native language can be transferred easily to the second language later. In this type of program, the native language classes do not teach academic subjects. The second-language classes are content-based, rather than grammar-based, so students learn all of their academic subjects in the second language. But obviously the words of wisdom go unattended. In Goa, the Government does not realize that by promoting English at the primary level it is depriving the students of mastering Konkani and of learning Hindi as well. Leaving the choice of medium of instruction to parents is a grave mistake. Parents can be given the choice of choosing the physician, not the medicine. Similarly, parents can be given the choice to choose which school their ward would go, not the medium of instruction.

Goa is fast turning into a city state with its fast pace urbanization. The common dream of the youth is to go abroad or aboard ship. Greener pastures woo them and hence they feel no need of the proficiency in Konkani. In view of this confusing situation, the second generation classes are seen moving away from the language of the soil. The natural transmission is therefore interrupted. Though teatr, the popular form of theatre, is vibrant in Goa, the masses are seen blindly following the classes that are in favour of English in public and at home.

Konkani is rich in vocabulary and idiom. Our speakers live in diaspora in four different states. Their dialects help enrich the language.  The multiplicity of scripts is yet another hurdle that limits the readership though conscious attempts are on to adopt a common script. As compared to the rest of the languages included in the Eighth Shedule, Konkani is spoken by hardly 4 to 5 million people. So in relative terms, Konkani is more vulnerable than many other languages, unless  mindful and premeditated efforts are made to reach out to those who are on the verge of losing her.