Since February 2009, the United Nations has observed the 21st of February as International Mother Language Day to promote linguistic and cultural diversity and multilingualism.

This year’s International Mother Language Day theme has been beautifully summarised on the United Nation's website:

“To foster sustainable development, learners must have access to education in their mother tongue and in other languages. It is through the mastery of the first language or mother tongue that the basic skills of reading, writing and numeracy are acquired. Local languages, especially minority and indigenous, transmit cultures, values and traditional knowledge, thus play an important role in promoting sustainable futures.”

Celebrating the Freedom to Read

Last year, we celebrated linguistic diversity with the Freedom to Read campaign, where our amazing community of co-creators helped us add stories in 13 new languages on StoryWeaver, for children to read and enjoy. Many of the languages added represented underserved and endangered linguistic minorities.

“When a language dies, with it a wealth of knowledge is lost forever. It is a death of a culture. Having rigorous discourse on this issue, and implementing mindful efforts to preserve endangered languages and its cultural capital is a requisite of every publisher and language warrior.” shares Suzanne Singh, Chairperson Pratham Books. “Through StoryWeaver, weaving stories of communities in their own languages, and increasing access to quality reading resources for children has been made possible like none other. We are also grateful to collaborate with our passionate partners whose primary mission, just like ours, is to nurture multilingual languages and take it to every child in the country.”

This year, we carry forward the spirit of our first Freedom to Read campaign, in a more focussed manner by seeding hyperlocal (both print and digital) libraries in three minority languages: Konkani, Bhoti and Haryanvi.

Konkani books for all

The Konkani Bhasha Mandal is Goa’s pioneering non-governmental institution striving for the cause of Konkani in social, educational, literary and cultural spheres. Since the launch of StoryWeaver, The Konkani Bhasha Mandal has been a steadfast supporter and collaborator. Passionate about strengthening the pool of children’s literature in Konkani, the organisation has translated over 100 books to the language on StoryWeaver and shared these stories digitally with children in schools who have enjoyed them tremendously. On the occasion of International Mother Language Day 2018, Pratham Books and the Konkani Bhasha Mandal have further strengthened their partnership and commitment to spreading the joy of reading by printing 25,000 copies of 50 Pratham Books titles in Konkani and distributing them freely to 250 schools in the region, impacting 25,000 primary school students. 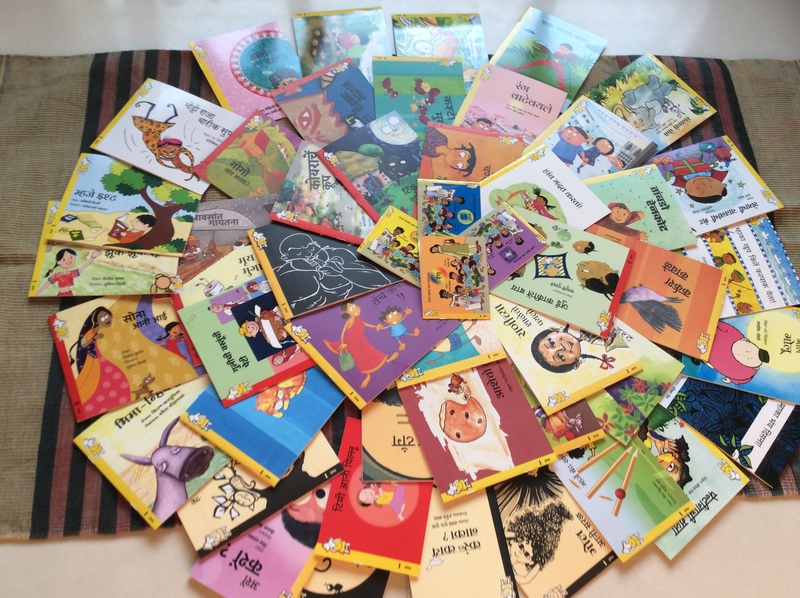 Chetan Acharya, President, Konkani Bhasha Mandal said, “It is our pleasure to join hands with Pratham Books which is working immensely in the field of children's literature. After knowing that there exists a website with a pandora of stories which can be used by teachers and parents for their children, we started translating them to Konkani. Konkani Bhasha Mandal is always in the process of producing delightful reading material in Konkani. We conducted many workshops especially for college going students on how they can translate a story from StoryWeaver. We are extremely delighted and happy that 50 storybooks created by Pratham Books and Konkani Bhasha Mandal are being released now. We will certainly have a long and fruitful partnership.”

In the run up to International Mother Language Day, we conducted our first ever translation hackathon with 25 educators from across 20 districts in Haryana. The two day, residential workshop saw the translation and inbuilt peer-to-peer review of over 60  level 1 picture books for children to Haryanvi.  The workshop was organised with the support of Mr. Pramod Sharma , a senior Education Department official in the Haryana Government.

Amna Singh, Consultant Editor, Pratham Books helped organise the hackathon. "The energy of the educators translating the stories and the excitement of the students peeping in and watching the stories take shape was palpable. These children have never before seen or read a storybook in their mother tongue language,  and neither have their teachers! So yes, in a way, history was created. And hopefully, the first step in the journey of documenting a predominantly oral language to safeguard it for the coming generations has been taken from Gorawar, a village in Rohtak, Haryana. And StoryWeaver is proud to be an enabler in this endeavour." 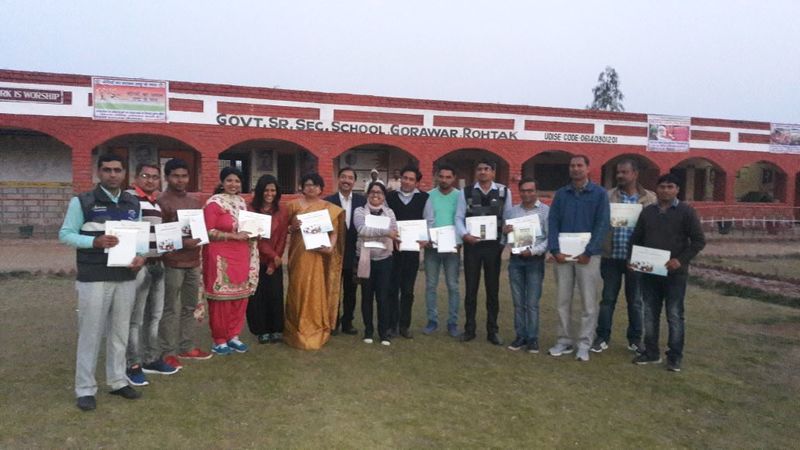 Participants are all smiles after the translation hackathon.

The seeds of a digital library in Bhoti

The Ladakhi language also called Bhoti or Bodhi, is a Tibetic language spoken in the Ladakh region of India. 17,000 Ft Foundation, is an organization that works to improve the lives of the people of remote, high altitude mountainous villages of Ladakh. In 2015, the organisation collaborated with Pratham Books to translate Pratham Books titles to Bhoti and distributed printed copies of these books to over 350 schools in the region.

"Six years ago, 17000 ft Foundation bought its first set of titles from Pratham Books for its libraries, an encounter that helped reach story books to children living in the remotest and most inaccessible corners of high altitude Ladakh. A first in a region where the only books available to children were textbooks in English, these books helped fire up the imagination of little children and helped draw them into a world of reading. Things then got even more exciting a couple years later when we translated 10 titles from Pratham Books into the local language, Bhoti, and distributed it across thousands of children in Ladakh. Today, the request for more story books in Bhoti pours into our office every day and StoryWeaver has made that process more easy, accessible and enjoyable. The privilege of making these wishes come true is all ours." shared Sujata Sahu, Founder of 17,000 feet.

How are you celebrating International Mother Language Day in 2018? Will you share a story in your mother tongue with children? Will you give your creativity a space to flourish and write or translate a story your mother tongue? However you decide to celebrate, share it on Social Media and tag us @pbstoryweaver!