The making of 'Moonlight in the Sea' | A guest post by Kartik Shanker, Dakshin Foundation

'Moonlight in the Sea' (written by Kartik Shanker, illustrated by Prabha Mallya, and published by the Dakshin Foundation) tells the story of Fatima who lives on an idyllic island in the Lakshadweep, watched over by Nihla, the moon. It introduces young readers to the underwater world of colourful corals, fascinating fish, mysterious manta rays, grizzled old turtles and dancing dolphins. 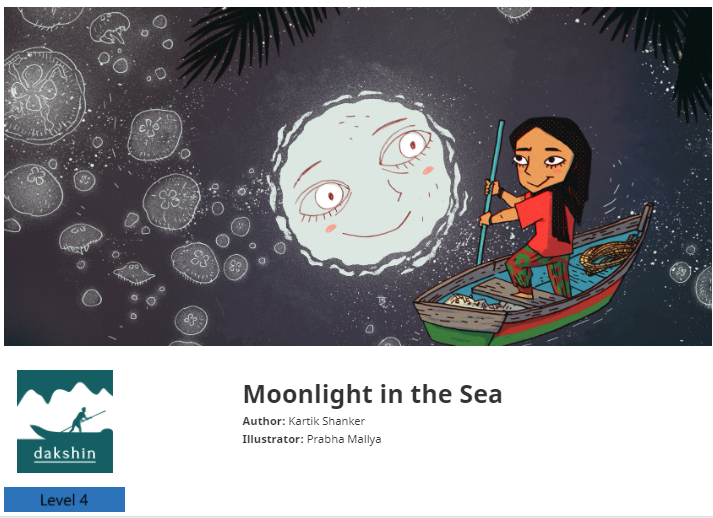 Learn more about the people and places that inspired the making of 'Moonlight in the Sea', in this blogpost by Kartik Shanker, author, ecologist, and founder trustee of the Dakshin Foundation:

As an aspiring wildlife biologist, you learn pretty early on not to expect National Geographic scenes when you visit a forest. It may take months to see your first elephant, years to see a tiger. It took me weeks of turtle walks to see my first olive ridley. But, put on a mask and a snorkel and stick your head under water at a good reef, and it looks pretty much like that last NGS show you watched.

I still remember the first time I went snorkeling in the Lakshadweep in 2001 – ‘the flurry of colour, the shock of shapes’. We were conducting sea turtle surveys there, and I spent every spare moment paddling around in the waters of the Kavaratti lagoon. A decade later, as part of Dakshin Foundation, we started a project on the tuna fishery in the islands. We monitored tuna using a participatory monitoring programme with the fishers, and one of our researchers, Mahima Jaini, conducted in-water surveys of baitfish. Around the same time, my student, Anne Theo had started her research on mixed species groups of reef fish.

At Agatti, the two of them would use Jaffer’s fishing boat to conduct their dives. Throughout their time there, his support for their field work and dive surveys was invaluable. Jaffer looked after them as he would his family. In the evening, he and his wife would visit with their daughter Nihla, then an adorable 3-year-old. His boat was named after her, Nihla Fatima.  The gentle ethos of the Lakshadweep, the still waters of the lagoons, the richness of its marine life, the solitary charm of Suheli all cried out for a story to be told.

Nihla inspired that story – about a little girl in the Lakshadweep, and the possibility that such girls could one day become marine biologists like Anne and Mahima.

I visited them frequently – happy times were spent diving off Jaffer’s boat. One time, we dived off Bangaram, saw some sharks, and then ate the most delectable fish biryani cooked on the boat.  Another time, the three of us made a trip to Suheli, an uninhabited island several hours by boat from Kavaratti. In 1979, my mentor, Satish Bhaskar, had spent 5 months there by himself during the monsoon to survey green turtles.  Many of these memories found their way into the narrative.

And then Prabha Mallya made the story come alive with her amazing and evocative illustrations. In my story, Nihla, the moon was a quirky character; through Prabha’s illustrations, she became a co-star. My niece’s daughter Ariana, age 2, was heard to say ‘When I grow up, I wanna be Nihla moon!" I guess that says it all. 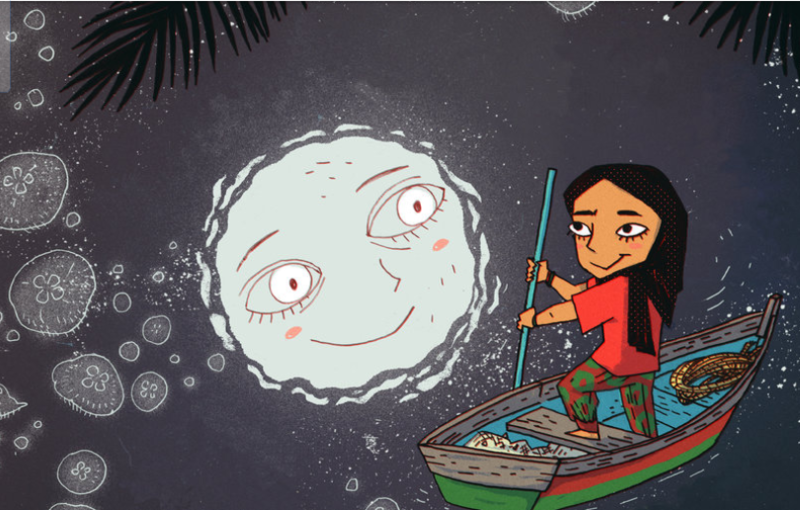 A big thank you, Kartik, Prabha and the Dakshin Foundation, for open licensing this wonderful book and making it available on StoryWeaver!

Illustrations in this post are by Prabha Mallya, from 'Moonlight in the Sea', written by Kartik Shanker, published by the Dakshin Foundation.

Kartik Shanker is a founder trustee of Dakshin Foundation. An ecologist by training, Kartik has interests in both mountain and marine systems. His work with marine turtles in the last 20 years has led to broader interests in coastal and marine conservation. Currently, he serves as an Associate Professor at the Centre for Ecological Sciences (CES), Indian Institute of Science (IISc.), Bangalore. In addition to academic research, he is also interested in strategies to improve environmental education and the public understanding of science. This interest encouraged Kartik to establish Current Conservation, a magazine that bridges conservation and art by bringing together research professionals, writers and artists from different parts of the world. He is the author of the book From Soup to Superstar, a historical account of sea turtle conservation in India. In his spare time, Kartik also seeks to distract young minds through children’s stories which include Lori’s Magical Mystery, Turtle Story, The Adventures of Philautus Frog, and Moonlight in the Sea.

Dakshin Foundation is a non-profit, non-governmental organisation. Their mission is to inform and advocate conservation and natural resource management, while promoting and supporting sustainable livelihoods, social development and environmental justice. They adopt interdisciplinary approaches in our research and conservation interventions, drawing from the fields of ecology, conservation biology, sociology, economics, and law. Their work aims at building community capacity for conservation and enhancing community engagement in environmental decision-making. Their goal is to promote ecologically and socially appropriate approaches to conservation and management in coastal, marine and mountain ecosystems in India.